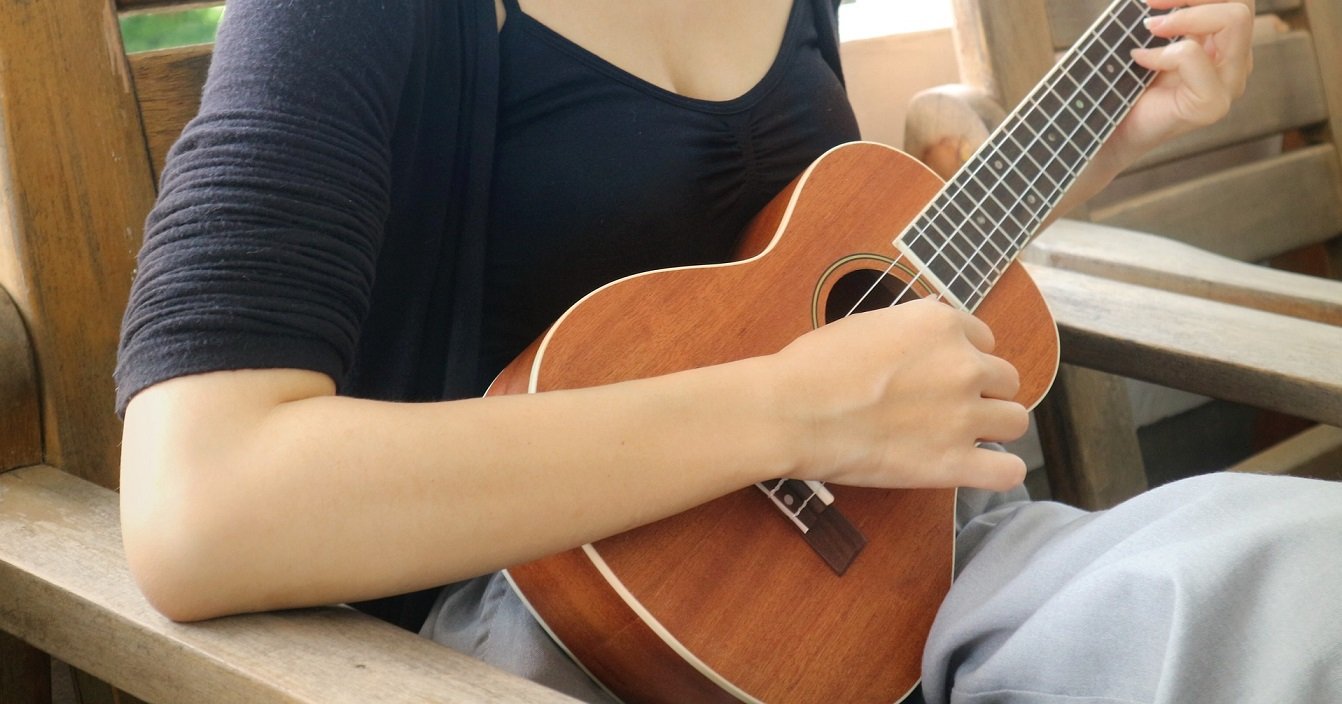 Everything You Need To Know About Ukuleles

Check Out Our Most Popular Ukulele Guide – Best Ukuleles Under $100

How long does it take to learn ukulele?

The great thing about the ukulele is that you can learn to play a basic three-chord sequence, which is enough to accompany most songs, in a single afternoon. It is one of the most approachable musical instruments for beginners. Of course, if you want to play like ukulele great Jake Shimabukuro, it will take a bit longer.

The basic building block is the ukulele tablature (‘tab’) which shows where your fingers go on the strings. Since there are only four strings, it’s easy to read, and a lot of chords use first position – that is, with your first finger on the first fret – so that you can go a long way without having to change your hand position and move along the fretboard.

Building up a good ukulele technique involves learning more chords so that you can vary the harmonies you use. It will also involve learning different strum patterns, which enable rhythmic variation and changes of atmosphere in the music. Using fingerpicking to create melodies is a further step along the way to playing solo ukulele pieces.

Great uke players will tell you they never stop learning. But while with some instruments you already need to be a player with several years’ experience to get into a band or an orchestra, you can start playing in a ukulele band within a couple of hours of making your instrument’s acquaintance, and then you can learn as you play.

What kind of ukulele do I have?

It’s quite easy to find out what kind of uke you have by measuring it. Standard lengths are 20 inches for a soprano, 23 for a concert ukulele, 26 for a tenor and 30 for a baritone. There are also a few different shapes of uke – for instance the ‘flea’ and ‘pineapple’ ukuleles which are round rather than figure-of-eight shaped, and have a richer and more resonant sound.

What’s the difference between a tenor and soprano ukulele?

What size ukulele should I get?

There are four main sizes of uke; soprano, concert, tenor, and baritone. The soprano is the smallest and highest, and it’s the most common ukulele. It’s a good starter instrument, though if you have very large hands it may be difficult to play well. The concert ukulele is a bit bigger and deeper than the soprano, at 23 inches long against 20 inches. Concert ukes also tend to be louder than sopranos, so this is a good choice if you want to play solo, or for singers who want to accompany themselves.

The tenor uke is a bit bigger still, and sounds rather more like a guitar, as does the biggest of the ukuleles, the baritone. If you want the classic ukulele sound, you’ll want to stick to the soprano or concert uke. The tenor is a good choice for soloists, though, and is used by many professional ukulele players. The baritone has a different tuning from the other ukuleles, so perhaps isn’t a good choice for beginners, though it blends well with guitars, for those wanting to play in mixed ensembles.

There’s also a sopranissimo size, which is even smaller and higher than the soprano – definitely not for players with large hands, but it can bring special brightness to the ukulele band. Beginners should probably get a soprano; as it’s the commonest size, it’s easier to find other players who have the same instrument, and it is also usually the cheapest.

How to re-string a ukulele?

Learning to restring a ukulele is important. You never know when you might break a string, and ukuleles that are in constant use need to be restrung every six months or so as strings wear out. But it can also be useful to restring a uke right at the start, as for many cheaper ukes, investing in a new set of strings can really improve the sound.

First, you’ll need to remove the old strings. Unwind the tuning key till the string is loose. Push the string a little way through the bridge, so that you can untie the knot at the bottom of the string, which will enable you to take the string off the instrument easily.

Next, take the appropriate string, and push it through the hole in the bridge, with just a few inches sticking out at the bottom. Take the short end, wrap it around the long end of the string and then around itself twice to make the knot. Then put the long end of the string into the hole in the tuning peg, and pull it through a few inches, leaving it loose on the instrument to give enough string for winding. Wind it up and carefully clip off any excess string.

Any good musician will be able to tune a ukulele by ear. But it’s much easier to use an electronic guitar tuner – if you’re not used to tuning an instrument, it will give better results, and it can also be handy if you need to tune up in a noisy room or with other instruments tuning at the same time.

One of the key differences between a uke and a guitar is that the ukulele has ‘re-entrant tuning’, meaning that if you play the strings in order, the notes don’t go evenly from low to high, but instead go down, then up again. The ‘lowest’ (fourth) string is actually the second highest. So it makes sense to begin with the third string instead.

Clip your guitar tuner to the neck of the instrument. Set it to C, and wind the tuning peg to tune the note. When you get started, it can be a good idea to track your finger along the string to make sure you find the right tuning peg. Moving the peg in one direction will slacken the string and lower the note, while in the other direction it will tighten the string and raise the note. The tuner will show you how far away you are from the note; when you are in tune, it will show a green light. You can then tune the other strings in order, so that the ukulele open strings will play G, C, E, and A.

How much does a good ukulele cost?

While you can buy a ukulele from many music shops for $25 or less, it’s worth considering a slightly more expensive uke to get a good start. Cheap ukes sometimes have cheap tuning pegs which make it difficult to stay in tune, cheap strings which don’t make a good sound, and thick laminate backs which don’t give good resonance. The action can also be very high, making it unpleasant to play. A $40-50 uke will give years of good playing and will sound better and stay in tune longer.

Really high-end ukuleles for professional players can cost as much as $900. A good second uke might cost around $200, and will generally be solid wood rather than laminate, with a higher quality set-up than beginner ukes.