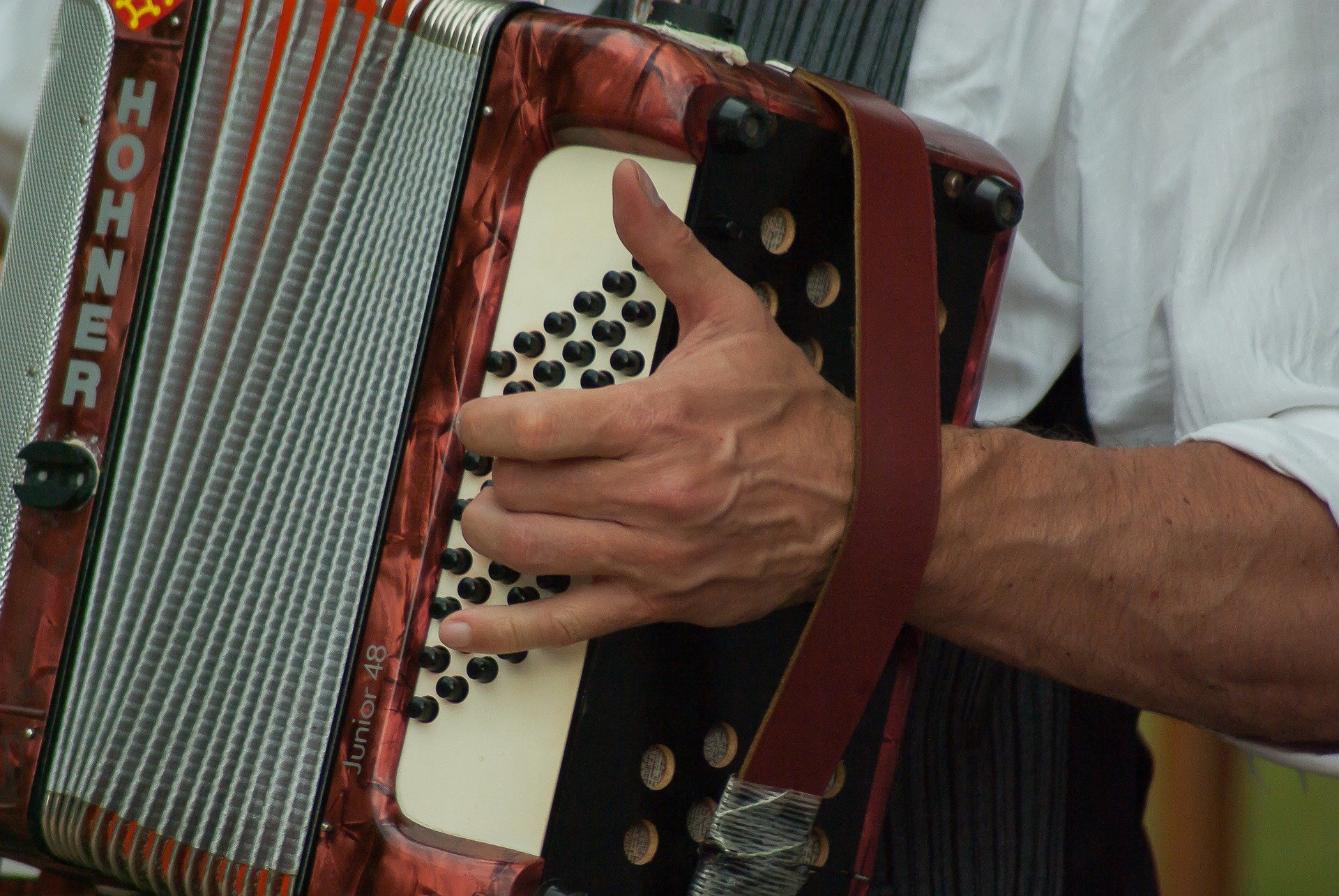 Everything You Need To Know About Accordions.

Where Does The Accordion Come From?

The accordion, and other squeezeboxes such as the bandoneon, melodeon, and concertina, were developed in the nineteenth century. The instrument was probably invented in Berlin in 1822, though the name ‘accordion’ wasn’t used until a few years later, and it spread rapidly throughout Europe, and to the US. There are now strong accordion traditions in the Nordic countries, where accordions are even used by heavy metal bands; in France, where the ‘musette’ is almost synonymous with Parisian cool; in Latin America, and in Russia. It’s also known as the national instrument of North Korea.

The idea behind the accordion – a ‘free reed’, that is, a reed that isn’t placed in the mouth of the player as is the case with an oboe or clarinet – goes back to the Chinese sheng, which uses bamboo pipes inserted into a gourd. Similar reeds had been used in the regal, a Renaissance keyboard instrument, and in the harmonica or mouth organ, so the idea certainly wasn’t a new one. But it was probably the advent of industrial production methods which made the accordion a relatively inexpensive and popular instrument.

How Much is an Accordion Worth?

Accordions vary widely in their value depending on the maker, their condition (if bought secondhand), and their size. Top Italian manufacturer Pigini makes a small accordion intended for young students, the Simba, which costs just over $2,000, but you can pay up to $40,000 for the custom-made, top of the range Mythos.

Many old accordions are not worth much. If they have been stored in a garage, quite often the reeds have rusted and the bellows have begun to decay. Replacing the reeds could cost more than the accordion is worth. On the other hand, a big Hohner that has been well looked after will hold its value. Chinese and East European brands like Hero and Delicia are not worth as much as the best German, Italian and French instruments – Maugein, Hohner, Scandalli, Soprani and Pigini.

Important features that can affect the price include how many treble reed banks the accordion has, and the number of bass buttons. Most accordions have two, but pricier accordions can have three or four, giving a wider range of different sounds and dynamics. You can tell by the number of switches above the treble keyboard – four or fewer switches indicate a two-bank instrument.

How Much Does an Accordion Cost?

A new accordion can cost as little as $300, and as much as $40,000. The price will depend on the manufacturer, the configuration of the instrument, and, at the top end of the market, whether you want a custom-made instrument.

The cheapest accordions on the market are mainly of Chinese manufacture; quality can vary widely, so it is best to buy from a good retailer who can provide a warranty and maintenance services. Western European brands such as Hohner, Castagnari and Maugein are more expensive but make a wide range of good instruments. At the top of the market, Pigini provides bespoke accordions for professional players as well as its production line.

Accordions come in various sizes, determined mainly by the number of bass buttons and the number of registers (different tone colors provided by different banks of reeds). The smaller the accordion, generally, the lower the price. While most professional accordion players will want a 120 button bass, beginners can get by with 32 bass buttons, and some professionals prefer smaller instruments for their easier portability. Solo players may find extra registers worth paying for, while for basic band or session playing, two registers is often enough.

Good old accordions can be found secondhand and can be a more affordable way to purchase an instrument. Even used, though, the high-end Hohner Gola will set you back in excess of $10,000. Still, plenty of good accordions in playable condition can be found from $200 upwards.

How Many Keys on an Accordion?

This question isn’t as easy to answer as it sounds. Accordions have two sides, the treble side on which the melody is played, and the bass side which provides chords (and, on a ‘free bass’ accordion, also the possibility of playing a melody in bass register). On the treble side, a piano accordion’s keyboard will provide between 17 keys on a children’s accordion and 45 keys on a full-size instrument. A 34 key instrument is generally enough for student players.

A button accordion doesn’t have a piano keyboard; instead, it has from three to five rows of buttons.

On the bass side, accordions have several rows of buttons which allow you to play chords to accompany the melody. Some accordions have only 12 bass buttons; these are really only useful for children starting out on the instrument and soon show their limitations. A 48 bass accordion is usually best for adult beginners and medium level students. At the top of the range are 120 bass instruments, which offer an expanded range of chord options, including sevenths and diminished sevenths as well as major and minor chords.

Bigger is not necessarily better. Starting out on a 120 bass instrument can be confusing; it’s usually better to start with a smaller instrument, since it is easier to locate the right buttons while learning how to use the bass side. It’s also important to recognize that the size of the treble keys can vary – players with smaller hands may prefer smaller keys.

What do the Buttons on an Accordion do?

The bass buttons on an accordion are used to accompany the melody that is played on the treble (right) side. Each row of buttons provides a different harmony. On a full-size Stradella, the first row gives the major third above the root note, the second row gives the root note, and the third and fourth rows provide the major and minor chord respectively. Fifth and sixth rows give the dominant seventh chord and the diminished seventh chord, introducing a small discord that can spice the music up.

On a button accordion, buttons are also used on the treble side instead of a keyboard. Button accordions can be chromatic (each button produces a single note) or diatonic (a button gives a different note depending on whether you are pushing or pulling the bellows, as the air is directed through a different reed). Unlike the keyboard, these buttons don’t go up a semitone each step, so button accordions aren’t as easy to learn if your first instrument was the piano. (Harmonica players, though, will find the diatonic accordion is arranged in a very similar way to the mouth-blown instrument.)

Besides the buttons, most accordions have ‘switches’ which allow you to access different registers, giving a variation of sound. At its simplest, you may simply have ‘loud’ or ‘soft’, while a higher specification accordion can give very different timbres according to the switches used. Some accordions also allow MIDI to be used – basically, the accordion can become a synthesizer.

How Can I Get Started on Button Accordion?

Although you can get started playing on your own using an accordion tutor book or videos on Youtube, it may be better to start with a few lessons given by a local accordion teacher. In particular, the first few lessons should concentrate on getting comfortable with the instrument, adjusting the straps properly and maintaining good posture, rather than trying to play tunes straight away. At this stage, learning to control the bellows properly is also important, and a good teacher will show how to get the best out of the instrument.

It’s best to start with simple tunes that use just a few notes. Most people find it easier to start with the right hand, and then add the left hand once they have a little confidence with the tune. It’s often good to practice both hands separately before putting them together. With the bass, find your ‘home’ button (it is usually cross-hatched so you can feel where it is without looking) and start off by just using the bass buttons around there; you can get plenty of variation in your harmonization before you need to start moving up and down the board.

Once you have the basics, consider joining an accordion orchestra or going along to traditional music sessions. That can really improve your playing. Look out for weekend music events that include accordion workshops, too; even for quite advanced players, the chance to work in detail on a couple of tunes can provide a real shot in the arm and perhaps a few technical tips as well.